enter to search or ESC to close

My Ten Days in Chastity to Lady Valeska

by Lady Valeska posted on October 14, 2018 in Entry, Submissive/Slave
2 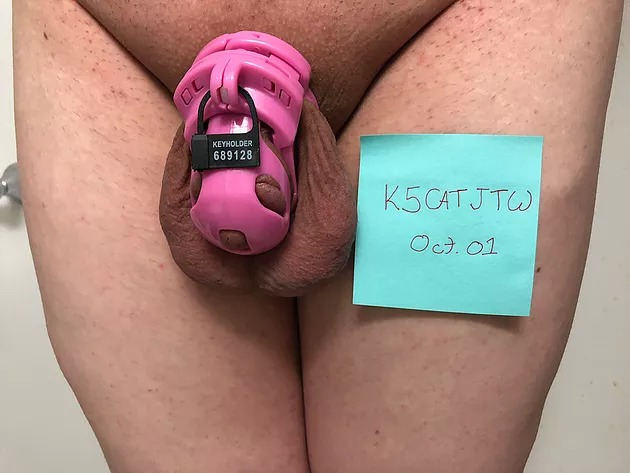 One of my favourite sounds in BDSM is the click of a lock. It can be so many great possibilities. It can be the beginning of a scene as cuffs are locked on. It can be the lock on a cage making that clicking noise as you realize that you are helpless bound. It can be something more intense like the lock on a collar closing as you feel a level of ownership wash over you. Ten days ago my clicking noise was different, it was the click of the lock that would keep me in chastity for the foreseeable future to Lady Valeska.

A few weeks before this noise Lady Valeska and I had discussed myself spending some time in chastity to her. It was a opportunity to experience more of a lifestyle chastity and less of of time spent in play. With a ocean between us both this was going to be a act of submission that involved zero play. The rules were simple as she told me what I was allowed and not allowed to do.

1. Orgasms are not allowed

3. Nothing sexual is allowed

4. Each day I will provide a picture with a code that is sent to me as proof that I am still locked

5. Each day I will up date a log that she could track my progress of being locked to her

6.These items would be sent by end of day.

The day of reckoning approached and I woke up nervous. To be honest it was more petrified. I was allowed to being my time in the evening so during that day I took the needed measures to shave to minimize potential issues. The evening came quickly as I sat there staring at the device that would be denying me certain pleasures. A power exchange was felt, and my submission started to sink deeper. Once the device was on a took a moment understanding and thinking of the clinking noise I was about to hear. It was time for my submission to her to begin. Once the locked with clicked in place I completely my first assignment to her and it was to email a photo of proof that I was now and in to the foreseeable future her chastity submissive.

The game changes when you are wearing a device the someone has put on you. The device is a constant reminder that she is the one in control. The sound of the lock hitting the plastic is a reminder of her voice, and the discomfort is a reminder to yourself that you are not in control. Things change when you realize that you need to wear this as you show up to work. This was going to be my first time wearing a chastity device at work, and with my co-workers around. The morning I struggled with options of what to wear. The idea of wearing “tight fitting” clothing was embarrassing since people might stare and look. After putting on the tightest boxers I could find, I found a pair of jeans that seemed loose fitting enough. I started my walk to the subway. Every person passing I felt was looking at my crotch. It was like they all knew I was looked in chastity as a beta male.

I was remember reading that “bondage doesn’t start until you really want out.” Two nights in I woke up in pain and discomfort. Clearly my body was turned on the pressure of the cage caused discomfort. I wanted my chastity device off. I needed it off. At least this is what part of me thought. However this was the moment it hit me. I was locked to Lady Valeska, and do no have the permission of her to take it off. My submission to her was not becoming deeper. My chastity had truly started since I now at this moment wanted out.

On my fourth night I had made a mistake. At the end of each night I always sent my required email. However on my fourth night I sent the email to draft folder and not to Lady Valeska. I woke up in the morning with a message from her say I had not sent her a email and wondering where it was. I was embarrassed and ashamed once I realized what I had done. I corrected the mistake hastily but a punishment was owed for my mistake. The punishment at a shallow level seemed easy.

It had now been a week and a half Lady Valeska was getting ready to go to the Femdom Ball. We had a quick chat in the day to check in and make sure I was doing okay. I had thanked her for some honesty earlier that week since I was going through something and she had given me some fantastic advice. The night of ball I sat at home locked to her as she was out. This was another moment where I could feel that submissiveness going deeper. I felt like a beta male while Lady Valeska was out at her party.

On the tenth day locked I was going to be released. It was time for my chastity to end. It felt emotional since the end wasn’t one that was planned however the cage I was locked in unfortunately broke where the cock-ring part was. The device was off and it was time to reflect. My submission to her still felt strong. The last ten days had been a a wave of emotions. Feelings that I don’t think I would have thought to of occurred. I had spent the last days as a lifestyle chastity submissive. There was no reward or play occurring. Lady Valeska held the key to the lock while I continued my day to day activities. It was during these ten days I learned more about myself, and my submission as a lifestyle submissive than I had learned in a long time.

It’s been a day since the release of my chastity and I look forward to hearing the click of the lock again.

If this submissive’s experience makes you earn to be locked in chastity and give over control to Me then be sure to fill out My contact application form and hand over your key.

2 thoughts on “My Ten Days in Chastity to Lady Valeska”